“This production brings the gritty, brutal truths alive in ways that nothing I’ve read or seen has succeeded in doing.”
“A powerfully moving work of documentary theater.”
– Charles Isherwood, THE NEW YORK TIMES 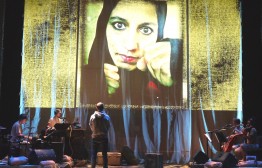 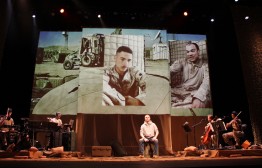 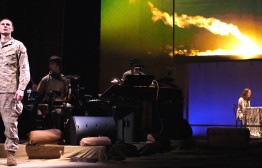 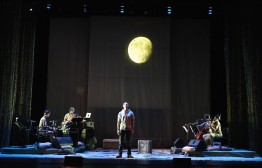 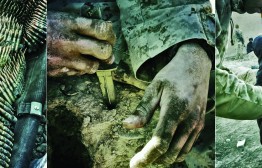 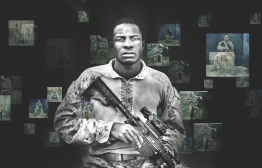 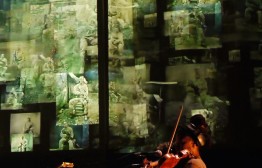 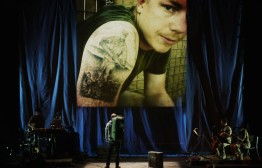 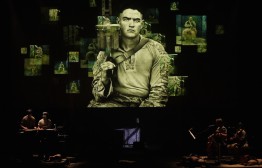 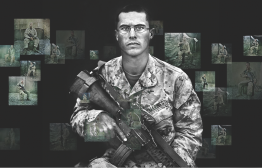 “A richly varied music score, by Michelle DiBucci, Mr. Bilous and Greg Kalember, is played live by a four-piece band…The images of Afghanistan often have a hypnotic beauty, and the music brings a consoling warmth to even the grimmer passages.”
-Charles Isherwood, THE NEW YORK TIMES

BASETRACK LIVE is a multimedia experience created at the intersection of theatre, music, journalism, and digital media. Drawn from social media exchanges between Marines in Afghanistan and their families at home, BASETRACK LIVE tells stories of Marines who fought in America’s longest war and their emotional return home.

While embedded with Marines in Afghanistan, and using only an iPhone, a group of photojournalists created a Facebook page and blog called Basetrack. Conceived as a way to combat loneliness and isolation among the troops, the website and blog developed into powerful tools for connecting soldiers and their families back home. They became a wildly popular, multi-layered archive of photographs, videos and personal exchanges receiving over 5 million hits. When the government ordered the sites to shutdown, military families staged a successful national campaign to reinstate them. And so this extraordinary and profound record exists revealing something most of us rarely see: alongside bravery and unimaginable sacrifice, the personal and emotional cost of war.

BASETRACK LIVE is built from verbatim interviews with veterans and their families and interactive projection design featuring photos and videos from Afghanistan. A dynamic electro-acoustic score composed by Edward Bilous, Michelle DiBucci and Greg Kalember will be performed by a 4-piece band featuring a DJ who creates a live mix of images, music and sound.

Basetrack Live opened at the Brooklyn Academy of Music on Veterans’ Day 2014 followed by a national tour of theatres and military bases across the country. The premiere also marked the 100th anniversary of the start of World War One. The original adaptation of Basetrack was premiered at the Center for Innovation in the Arts at the Juilliard School.