The Quest for a Just and Lasting Peace
President Jimmy Carter 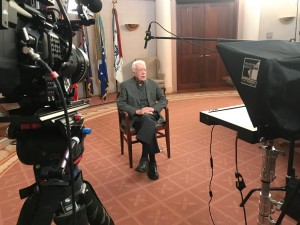 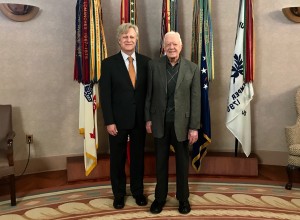 “Peace is the single most important gift a nation can give to its citizens. It is a quality of life and state of being sought after for millennia, but seldom achieved for extended periods of time.  Only when a society lives free from fear of violence and oppression can people rise to their highest level of being and achieve their greatest good. Only in peace can nations work together to improve the lives of its citizens and address the needs of humankind.  100 years after the end of the Great War it is fitting that we reflect upon the terrible consequences of war and reaffirm our commitment to achieving peace.

1914 ushered in a catastrophic era of history. Nations, that only a few years before, enjoyed unprecedented growth and prosperity, were devastated by global conflict. The war machine in Europe turned the extraordinary achievements of science and technology against its citizens, bringing untold sorrow to millions and reducing farms, homes, and cities to rubble.

President Woodrow Wilson understood that America had to enter the war but that it would do so for the noblest of reasons: to bring an end to the terrible conflict, to bring an end to human suffering, and to provide a path to peace.  For a brief while, his vision of securing a “just and lasting peace” gave hope to people that the Great War would become “the war to end all war”. Sadly, President Wilson’s dream of achieving peace through a bold new League of Nations was never realized, and only 20 years after Armistice the world was drawn again into an unimaginable global conflict.

Wilson’s efforts, however, were not in vain. His vision for peace became a guiding force for future generations and for the creation of the first international community based on human rights and mutual respect for all peoples and nations.

Today, thanks to the sacrifices of so many brave men and women, and to the wisdom and humanity of our greatest leaders, the world has enjoyed an era of unprecedented growth and achievement.  Many young people today, have never seen conflict or have had cause for fear of violence.

Memory fades however, and once again intolerance and division are on the rise. Some leaders today speak about war as if it were an acceptable alternative to peace, and a choice with few consequences.  And so today, I ask that you not to forget the sacrifices made by so many men and women 100 years ago. They gave their future for a dream that we could live in a world free from war and oppression, and guided by the principles of democracy.

Let your hearts and minds be inspired by the nobility of their cause.  Use your talents and gifts to shape the course of history.  Let us together, reaffirm our commitment to a vision of peace based on fundamental human rights for all people, and mutual respect between all nations great and small.“